In Memory of Chip

When we lose a close friend, we often feel helpless in our grief. We want to let the world know what a great friend we had. This is from one of our teams who made a generous donation and cherishes his volunteer service in our family of therapy dog volunteer service.

Gregg and Team Bette in memory of my best friend Chip (shown here on the left with Gregg wearing the hat):
I met Chip during the summer of 1974 at Beauregard Country Club in De Ridder, Louisiana. We quickly became friends and played golf every day during that summer. Once our senior year of high school started, we continued to golf almost every day after school. As lo 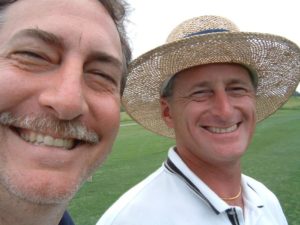 ng as I can remember, and until the day he died, he would always beat me by a stroke or two.

Our friendship survived through many life situations and numerous home locations. Over the years, we were able to spend lots of time together going to sporting events, playing golf, and just hanging out. For many years, we were able to have an annual “guys” golf trip, which most of the time was in the Carolinas.

His three daughters grew up in Charlotte, North Carolina, and they all still live there. They were the pride of his life, along with his grandchildren in recent years. In all my years with Chip, I can say I never heard a cross word from him, nor did I ever see him get mad at anyone or anything.

Chip was an amazing person, and one that I can say was my best friend, through thick and thin, and throughout all years. His passing is an extreme shock, and he will be sadly missed.